eDEX-UI is a fullscreen, cross-platform terminal emulator, and system monitor that appears and feels like sci-fi or fashionable keyboard It is available for all platforms like Windows, Linux,macOS, etc with an advanced monitoring tool. It is heavily inspired by the TRON Legacy film effects, the eDEX-UI job was initially intended to be”DEX-UI with less” art” and much more” distributable applications”. While keeping a contemporary look and texture, it strives to be usable together with the larger goal of bringing science-fiction UXs, in scenarios and to keep a particular level of performance.

eDEX-UI allows you to run five terminals themes with full emulation. In eDex-UI  default terminal, the theme name is xterm-color, that meaning eDex-UI has multicolor support. The best thing about eDex-UI is that the keys light up on the keyboard while you type any key, so if you’re using eDEX-UI on a tablet, the keyboard could show the alphabets or number what you typing which is not good for your privacy or security. We have to use a theme without the keyboard on those devices, although it does look pretty cool when we are typing. This is eDEX-UI theme, with htop running in its terminal: 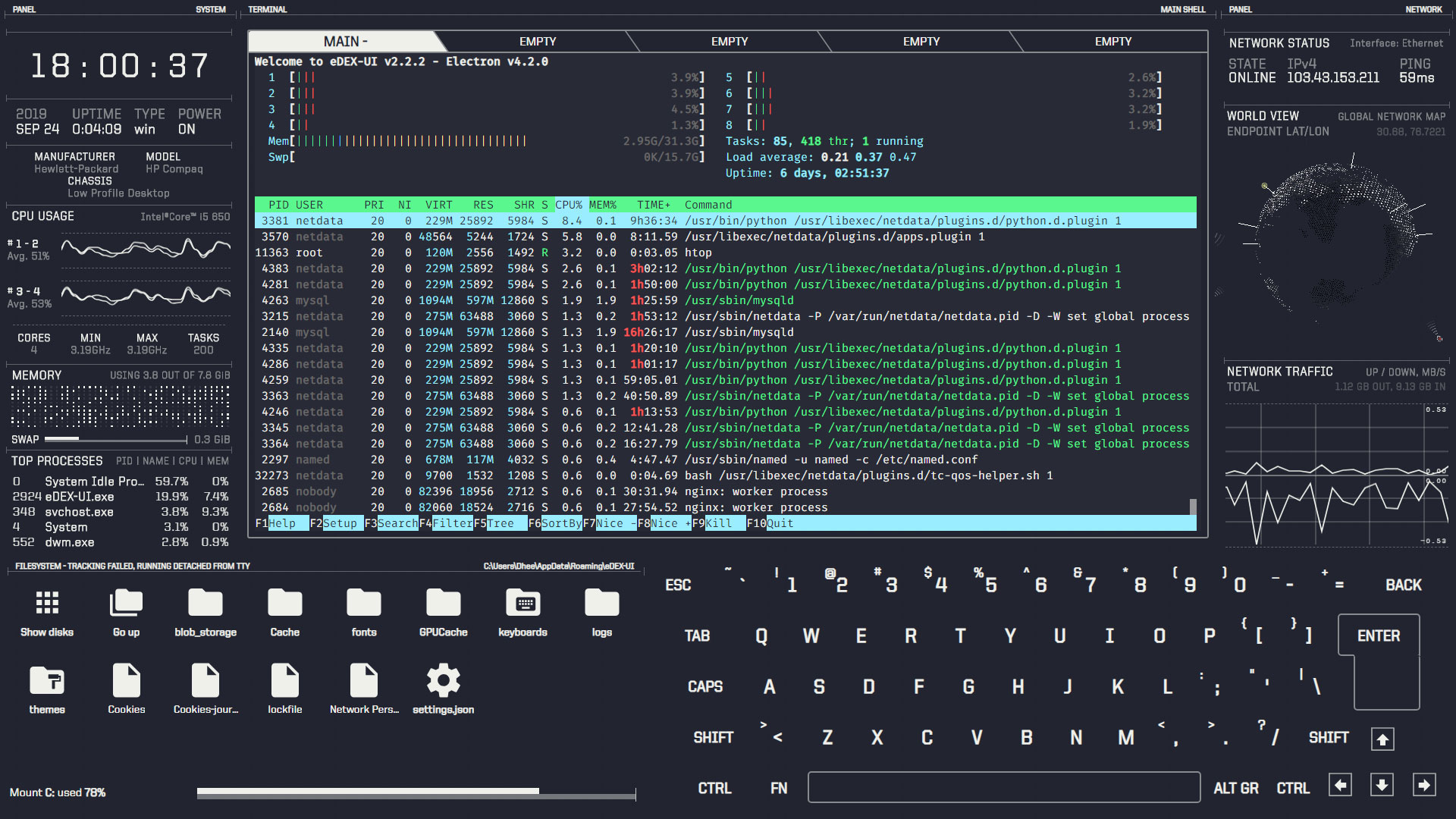 As you can see from the above screenshot, eDEX-UI uses quite a bit of CPU (htop shows per core CPU usage. So that’s not the total CPU usage though), however, its purpose is not for doing actual work or track your system. Its purpose is… to allow you to look a HACKER. Use it to impress your buddies, personalize it, and post a screenshot on social networking, etc. If you are widget friendly, you could use far more lightweight and easy to configure according to need, such as Conky. eDEX-UI supports customization. You can change the default shell which is  Bash on Linux and Mac, and powershell.exe on Windows, the keyboard layout, themes are also supported, and the eDex-UI comes with 8 default themes, but you can also create your own theme.

You can exit eDEX-UI terminal by typing “exit”  or simply you can holt  Alt + F4 keys on the keyboard. How To Setup and configure eDEX-UI – Terminal | Hollywood Style Terminal Emulator for Windows, macOS & Linux(Working 2020).

Thank you for reading this post and keep connected to TECH DHEE to continue enjoying excellent posts. Share your views about this post in the comment section below. If you still have any queries, throw it in the comment section. If you find this post helpful, don’t hesitate to share this post on your social network. It will only take a moment, and also it is quite easy and useful for others.

A geek by passion! I started my career as a Network Engineer and currently, I am working as a Network & Systems Administrator. It was probably the most fun I’ve ever had in a job. I felt like a magician and got to see the good side of people.

The First 5 Things to Do After Installing Kali Linux

Kali Linx is a Debian (Testing) based distro, which is developed by an information security training company, Offensive Security. It is...

How to Create a System Restore Point in Windows

In this article, I am gonna show you how to create a system restore point step by step. If you...

Today making a bootable pen drive is easy because on the internet you get many software and apps with different...